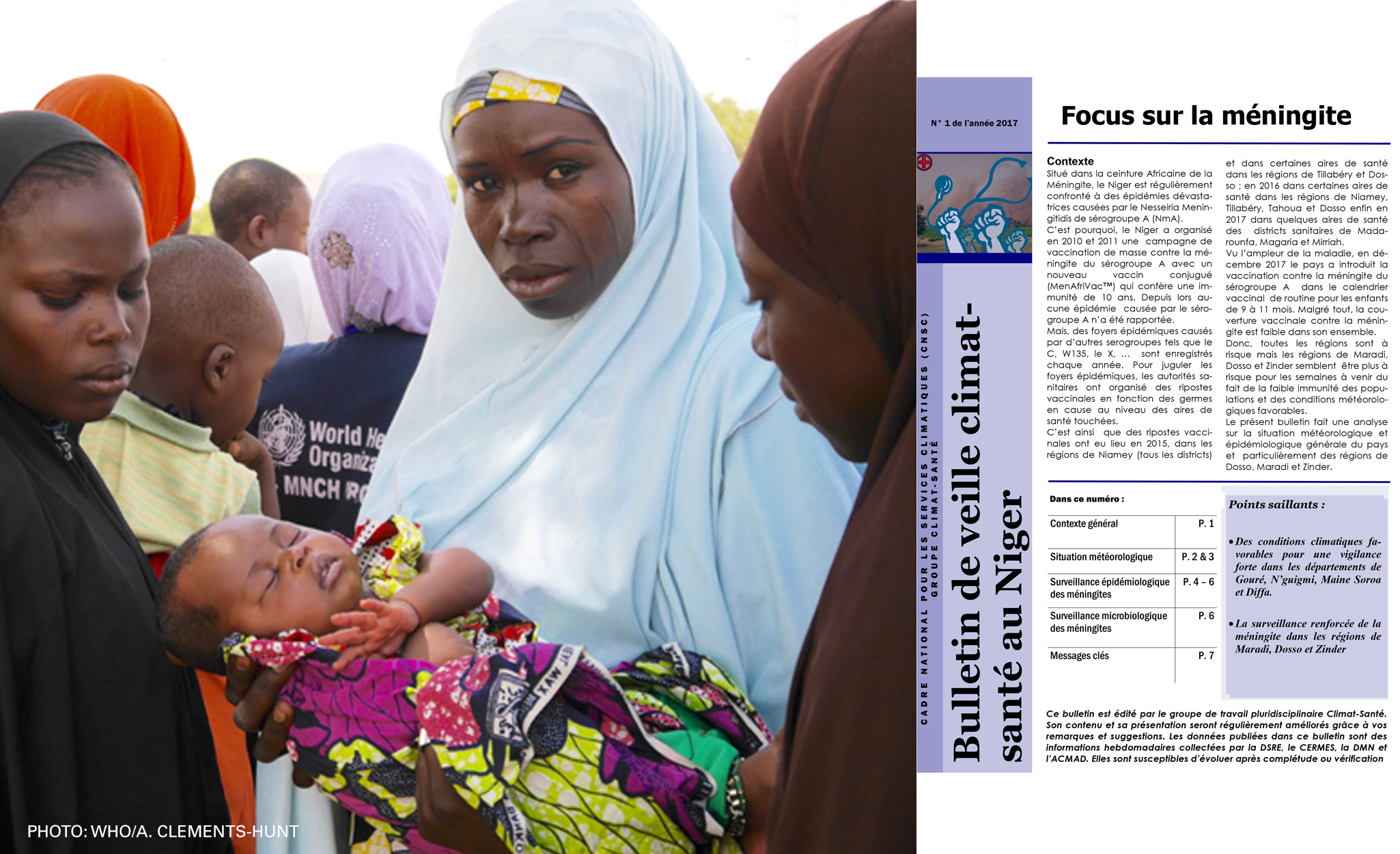 In December 2017, Niger released its first Health Climate Bulletin, which was produced by the multidisciplinary Climate-Health Group. This is one of five climate thematic groups set up under the Niger’s National Framework for Climate Services, which is now under implementation. The bulletin, which provides a co-developed climate product for the health sector, was developed with support from the Climate Services for Increased Resilience in the Sahel project, a Global Framework for Climate Services (GFCS) initiative funded by the United States Agency for International Development (USAID).

The first edition of the bulletin focused on meningitis, a devastating infection of the thin lining enveloping the brain and spinal cord, with a quick onset and high rates of long-term disability and fatality. Located in the “Meningitis Belt” of Africa, Niger is regularly confronted with devastating outbreaks from various strains of the disease. Climate information can help Niger monitor the environmental suitability for meningitis outbreaks, since humidity, dust and wind have been proven to be good predictors of where and when seasonal outbreaks of meningitis may occur.1 Regular updates on dust and wind conditions in Niger can help health authorities plan vaccination campaigns to improve the country’s coverage against this disease, especially in areas at heightened risk of an outbreak.

“The expected impact of this Bulletin is to support the current disease surveillance system through the production of information on climatic parameters and surveillance data on meningitis,” said Mody Issaka, an epidemiologist at Niger’s Department of Epidemics Surveillance and Response, who also leads the Climate-Health Group. “This can help health authorities to take prompt and effective decisions, as well as sensitize the population on preventive measures with a view to reducing the morbidity and mortality caused by meningitis.”

The Climate-Health Group is composed of nine member institutions. The bulletin draws from data collected from Niger’s Direction de la surveillance et de la riposte aux épidémies (DSRE), the Centre for Medical and Health Research (CERMES), Niger’s Direction de la Météorologie Nationale (DMN) and the African Centre of Meteorological Application for Development (ACMAD) and provides an analysis of the climactic conditions in and an epidemiological overview of Niger. The bulletin was distributed to approximately 1500 recipients.

Related Event/Project:
Climate Services for Increased Resilience in the Sahel