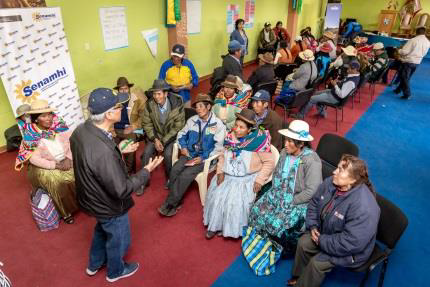 In two pilot communities monthly capacity-building workshops are offered to discuss and apply pilot forecast products. More than 60 farmers from the Quechua district of Pusi (Northern Puno) and 28 from the Aymara district Ilave (Southern Puno) participated and learned how to interpret and use regional climate and weather forecasts at the local scale. Farmers stated that they rely mostly on traditional forecasting methods, but also see the advantage of scientific based agrometeorological information provided by Servicio Nacional de Meteorología e Hidrología del Perú (SENAMHI). "We are farmers and ranchers. It is very important for us to be informed about extreme events that affect our crops and livestock", stated Celestino Sucapuca. The producers pointed out that local radio and mobile phones are the most easily accessible communication channels for them. They further showed interest in a continuous dialogue among them and with meteorologists in order to benefit from scientific and local ancestral knowledge.

In September, a second household survey was conducted in Cusco with 402 potato and maize producers. These results will complement the studies performed in Puno and will help to develop new climate services tailored to the smallholders’ needs.

During their scientific visit in Switzerland, an economist and an agronomist from SENAMHI developed their capacities in the design, conduction and evaluation of socio-economic benefit studies. The training was realized by the University of Zurich, Eidgenössische Technische Hochschule (ETH) Zurich, Swiss Tropical and Public Health Institute (TPH) and MeteoSwiss.

CLIMANDES presented the results of the socio-economic evaluation studies to governmental entities, NGOs, private institutions and interested individuals in Lima and Puno. The Ministry of Economics and Finance (MEF) was informed about the potential return on current and future investments in climate services. These awareness-raising activities are fundamental to provide SENAMHI with the necessary resources for delivering climate services after the project end.